OSM#4, setting (Release FOUR) direction from the place where the roads cross*

ETSI OSM had its 4th plenary meeting at the end of October. Actually, since we meet for mid-releases too, it was our 7th community gathering since we kicked off the project in April 2016. So many exciting things have happened since that kick off that we tend to forget that we are “only” 18 months old.

The 4th plenary meeting was hosted by Indra at their Madrid Campus where they were so attentive to every single detail, they ensured that the OSM community had an extremely productive week.

The agenda for the week was quite ambitious: wrapping up Release THREE and setting direction for Release FOUR ... while growing the ecosystem of OSM on-boarded VNFs with a hands-on workshop … and making sure we put some time aside to celebrate the latest community achievements together.

The VNF on-boarding workshop gathered more than 30 participants interested in gaining first-hand experience at writing VNF Descriptors and Charms. The learnings of the workshop will assist their organizations in ensuring day 0/1/2 operations and provide them with the benefits of the latest OSM features. Another positive result of the workshop was extensive testing of OSM Rel THREE by the user community.

On Wednesday evening, the community gathered on the rooftop terrace of the Circulo de Bellas Artes to enjoy the stunning views of downtown Madrid and toast with a glass of fine Rioja under the stars of a surprisingly mild autumn night. It was the perfect way to celebrate our recent recognition as the Best Open Source Development initiative at the SDN NFV World Congress Network Transformation Awards together. It was also an occasion to toast Manuel Peuster, from the University of Paderborn and Sonata project, who was awarded Outstanding Technical Contributor by the community for the OSM Release THREE Cycle. And it was definitely a nice opportunity to celebrate the community’s outstanding growth – the OSM member count is now at 83 organisations, including our newest members Citrix, Mavenir, Empirix, and i2cat who were attending their very first OSM plenary. 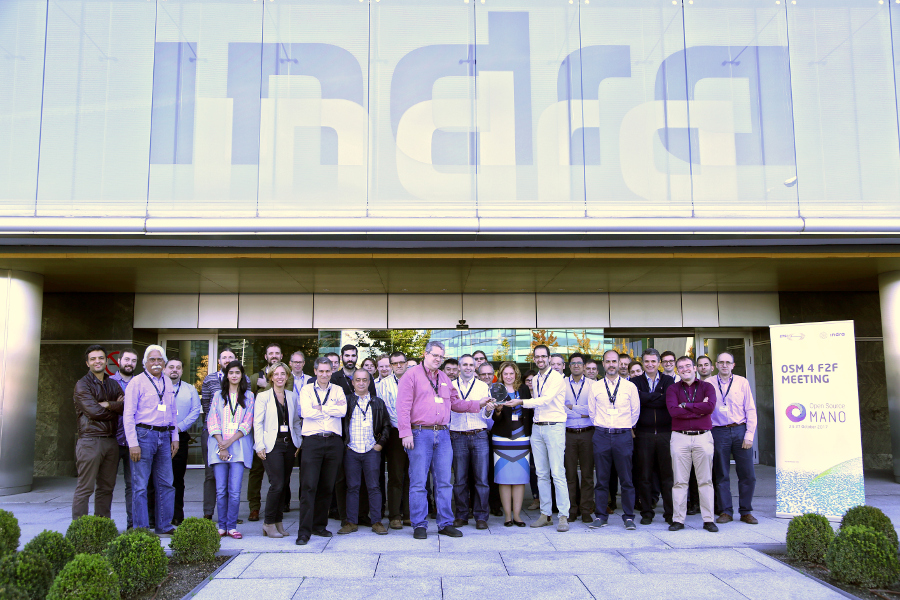 Now, back to the meeting: the OSM community spent long hours setting the direction for OSM Release FOUR which will continue development on the main project themes, such as service assurance, usability, security, resiliency, and continuous integration and delivery. Release FOUR will also aim to enhance alignment with standards and focus on cloud-native and 5G aspects, for example, container-based NFV deployments and distributed orchestration.

During this meeting, it was agreed to consolidate the feedback loop with ETSI NFV by looking at possible alignment with the REST APIs and NFV Package Model being developed by the ISG.

OSM, as one of the open source communities supporting the ETSI NFV Plugtests Programme, will participate extensively in the 2nd NFV Plugtests in January 2018 through a wide range of OSM member companies. Moreover, an intermediate release has also been planned for December 2017 to support the Plugtests activities and the co-located OSM on-boarding Hackfest.

In a nutshell, OSM#4 announced a wildly busy but focused Release FOUR cycle that will reinforce OSM as a production-ready upstream NFV MANO solution with a wide VNF ecosystem. These developments will also play a key role in furthering transformation efforts to cloud-native 5G networks.