It may not be the Super Bowl, but ETSI NFV PlugTests Tackles Interoperability on a Big Stage

One core tenant of marketing that I learned long ago is that marketing is 10% strategy and 90% blocking and tackling. For those not familiar with the terminology of American football, it simply means that a good game plan and skilled players who score points often get the glory, but the real work that often determines success are the less glamorous tasks of blocking and tackling. And this truism transcends marketing. In any endeavor, a strategy is only as good as its execution and the preparation that takes place before game day.

Yes, the Super Bowl is February 5th, and I started with this adage because I see that ETSI and the Open Source MANO community have taken it to heart. Over the past year, while the industry has seen its share of marketing hype, the OSM community has been doing the hard work of developing working code and bringing together diverse organizations to test software and facilitate interoperability among all the working parts of a successful NFV deployment. This is embodied in the recently launched first ETSI NFV Plugtests event.

ETSI will bring together over 70 people from thirty organizations for two weeks at the 5TONIC Laboratory in Madrid, starting January 23rd.

“Over 40 commercial and open source implementations will be tested for interoperability, including 20 virtual network functions, 10 management and orchestration solutions and 10 NFV platforms. Over 140 people have prepared this two-week event, forming an engaged and diverse community. Key NFV Open Source projects, ETSI OSM, Open Baton, OPEN-O and OPNFV, will also participate. This first ETSI NFV Plugtests is a unique opportunity to stimulate synergy and alignment across the NFV ecosystem.”

The Plugtests event has been a highly collaborative effort that actually began in October with over 140 people participating in weekly conference calls, conducting pre-testing and remote integration, and developing and improving the test plan. The scope of the NFV Plugtests focuses on two main efforts:

The RIFT.io team has worked hard with OSM community over the past several months to prepare and plan for the Plugtests event, which required significant effort from all participants. Everyone contributed substantial time and resources and, in turn, the Plugtests provided unique opportunities to learn, analyze, consolidate, and eventually align with the needs and challenges of VNF builders and VIM/NFVI vendors who are working with OSM. For example, RIFT.io and OSM have new insight into the different architectural approaches of the VNF vendors. Some vendor solutions were single virtual machine (VM) implementations; others were multi-VM. Scaling also varied with differences in how vendors addressed VNF and NS scaling. There were also variations in their use of single-disk and multi-disk features.

In general, it was very helpful to OSM and RIFT.io to see these differences and identify how we create a standard way to deploy multi-vendor VNFs and network services. Speaking for RIFT.io, it will help us make more valuable contributions to OSM. All the participants can also provide valuable feedback to ETSI on where these NFV Release 2 standards are most urgently needed to enable multi-vendor interoperability.

At the end of the Plugtests, ETSI will compile all the data, review with the participants, and produce and share a Plugtests report. The report will provide overall test results, but will also provide feedback on NFV specifications and general interoperability. One of the key goals of the Plugtests is to close the gap between standards and commercial and open source implementations. 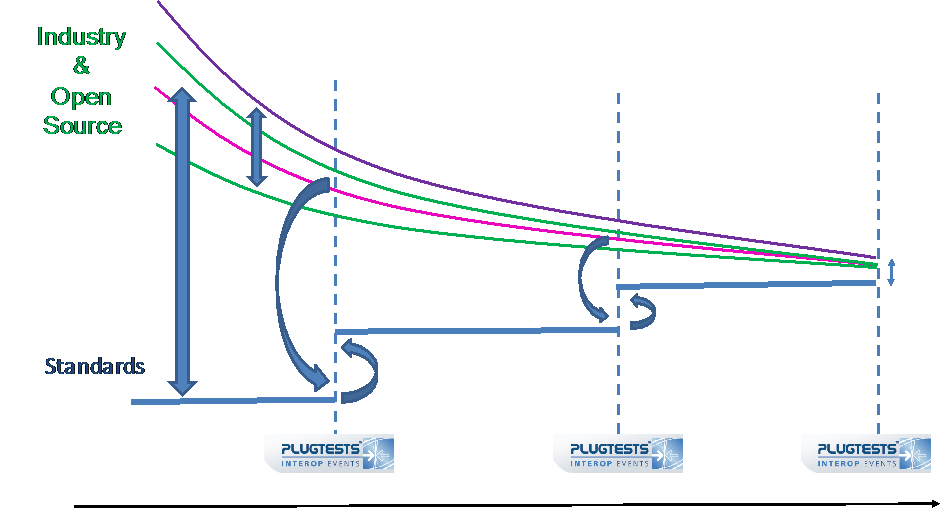 Light Reading wrote an interesting piece in October, specific to MANO, that discussed open source vs. open standards. The conclusion is that open source is certainly building more momentum in the telco industry but standards are still critical for building consensus related to the needs of telcos. If anything, the emergence of so many open source projects is helping standards development organizations (SDOs) such as ETSI to work closely with open source projects (and even host them, eg: ETSI OSM). The unique and valuable takeaway from the NFV Plugtests is bringing together commercial vendors, multiple open source initiatives, and open standards for the purpose of end-to-end interoperability.

It’s not glamorous or sexy, but the work that has gone into the Plugtests event – the preparation, the blocking, and the tackling - is what will lead to the metaphorical touchdown. Successful projects and tests such as this are what will eventually lead to production deployments of fully virtualized, multi-vendor network services. And we’re closer to that reality than we’ve ever been. 2017 will be a watershed year for NFV and we’ll look back on the first ETSI NFV Plugtests as a major catalyst. Stay tuned.