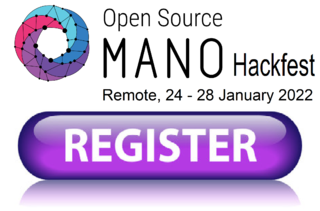 Open Source MANO (OSM) is an ETSI-hosted open source community delivering a production-quality MANO stack for NFV, capable of consuming openly published information models, available to everyone, suitable for all VNFs, operationally significant and VIM-independent. OSM is aligned to NFV ISG information models while providing first-hand feedback based on its implementation experience.

Release EIGHT brings a number of improvements over previous releases. For the full list of new features, please refer to the Release EIGHT Documentation. For a comprehensive overview of OSM functionalities, you can also refer to the OSM Scope and Functionality White Paper or to the release notes of previous OSM releases (ONE, TWO, THREE, FOUR, FIVE).

1.1. Assumptions about interaction with VIMs and VNFs¶

The following figure illustrates OSM interaction with VIMs and VNFs:

In order for OSM to work, it is assumed that:

All you need to run OSM is a single server or VM with the following requirements:

Once you have prepared the host with the previous requirements, all you need to do is:

TIP: In order to facilitate potential trobleshooting later, it is recommended to save the full log of your installation process:

You will be asked if you want to proceed with the installation and configuration of LXD, juju, docker CE and the initialization of a local docker swarm, as pre-requirements. Please answer “y”.

You can include optional components in your installation by adding the following flags:

1.2.1.2. Installation on a standalone Kubernetes environment¶

OSM can be deployed on a single host running a Kubernetes cluster. Although the default option is to use docker swarm, you can now tell the installer to use K8s as the container framework. The installer will install the required packages to run a single-node K8s cluster and will deploy the different K8s objects on it.

In addition, you can use the option --k8s_monitor to install an add-on to monitor the K8s cluster and OSM running on top of it.

After some time, you will get a fresh OSM installation with its latest, pre-built docker images which are built daily. You can access to the UI in the following URL (user:admin, password: admin): http://1.2.3.4, replacing 1.2.3.4 by the IP address of your host.

As a result of the installation, fourteen docker containers are created in the host (without considering optional stacks). You can check they are running by issuing the following commands:

If the previous docker commands do not work, you might need to either reload the shell (logout and login) or run the following command to add your user to the ‘docker’ group in the running shell:

At any time, you can quickly relaunch your deployment by using the pre-built docker images, like this:

To check the logs of any container:

OSM client, a python-based CLI for OSM, will be available as well in the host machine. Via the OSM client, you can manage descriptors, NS and VIM complete lifecycle.

1.2.2.1. Checking your installation when installing on K8s¶

As a result of the installation, different K8s objects (deployments, statefulsets, etc.) created in the host. You can check the status by running the following commands:

To check the logs of any container:

Finally, if you used the option --k8s\_monitor to install an add-on to monitor the K8s cluster and OSM, you can check the status in this way.

Before proceeding, make sure that you have a site with a VIM configured to run with OSM. Different kinds of VIMs are currently supported by OSM:

OSM can manage external SDN controllers to perform the dataplane underlay network connectivity on behalf of the VIM. See EPA and SDN assist

For advanced options, please refer to the OpenStack Setup Guide.

With respect to Openstack, the additional configuration for VIO is the following:

For common options, you may refer to the general OpenStack Setup Guide.

For advanced options, please refer to the Configuring AWS for OSM.

For advanced options, please refer to the Configuring Eclipse fog05 for OSM.

In this example we will deploy the following Network Service, consisting of two simple VNFs based on CirrOS connected by a simple VLD.

Before going on, download the required VNF and NS packages from this URL: https://osm-download.etsi.org/ftp/osm-3.0-three/examples/cirros_2vnf_ns/

The onboarding of a VNF in OSM involves adding the corresponding VNF package to the system. This process also assumes, as a pre-condition, that the corresponding VM images are available in the VIM(s) where it will be instantiated.

If not available, it would be required to upload the image into the VIM. Instructions differ from one VIM to another:

If you want to learn more, you can refer to the rest of OSM documentation.